After roughly half a year of design and troubleshooting, I finished fully testing my custom variable high voltage DC power supply yesterday. The supply is capable of producing up to 20 kV at 10 mA. I will be using it to charge my high-voltage capacitor bank and hopefully explode some water.

The circuit is essentially comprised of three subsystems: a DC mains supply, an H-bridge inverter, and a high-voltage multiplying rectifier. The first is visible in the top portion of the above photo. It's just your basic diode bridge rectifier, with a 60 Vp sinusoidal input and nearly 1000 uF of smoothing capacitance.

The H-bridge inverter can be seen in the middle of the photo. Its driving frequency can be varied between discreet values ranging from 40 to 47 kHz using the rotary switch visible towards the bottom of the shot. This small range of driving frequencies corresponds to a large range of output voltages (from about 8 to 20 kV), as my flyback transformer (not visible in the above photo) resonates at near 60 kHz. This phenomenon is illustrated below:


The circuit's business end, the high voltage output stage, is depicted below:


In order to prevent arcing between and within the high-voltage components, I had to submerge them all in mineral oil. While messy, this method was extremely effective at insulating the parts.

The small, innocuous-looking flyback transformer I used in my circuit is somewhat unconventional. Most HV hobbyists think of the large suction-cup sporting flyback transformers found in CRT's when they hear the term (see picture below). These transformers are frequently used to make spark generators and are easy to salvage from old TV's and computer monitors. They are generally much beefier than the downsized flyback I used in my supply, and one would expect to get more voltage from them.  I experimented with using one of these in my supply, but ultimately decided against it. All such flyback transformers I found were internally rectified (AC flybacks were outmoded in TV's thirty years ago) and therefore could not be used with my CW multiplying rectifier. So despite the traditional flyback's heft, I was able to get a greater voltage output from my miniaturized version by tacking a voltage multiplier onto its AC output.

Troubleshooting my circuit was hardly mundane; between prototypes, my circuit experienced some catastrophic failures. The aftermath of one is pictured below: 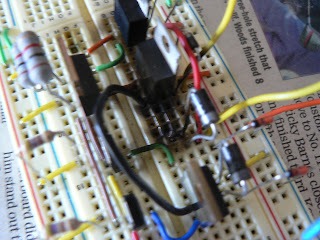 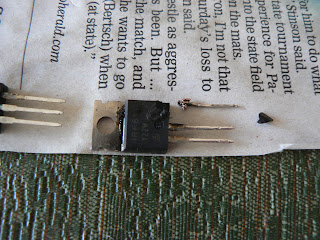 I was testing the circuit at the limits of its operating range, and I neglected to account for the heat my driving transistors would accrue. After operating for about five seconds, the transistors promptly burst into flames. Let it be known: the large heatsinks visible in the first picture are there for a reason!

Assuming my circuit doesn't spontaneously combust again any time in the near future, I will be using it to (carefully!) charge up some gargantuan high-voltage oil filled capacitors (see below). Once I'm confident  I can charge and discharge these monsters safely, I'll hook up my makeshift water accelerator barrel, and we'll see if I can replicate Peter Graneau's overunity water arc explosions. 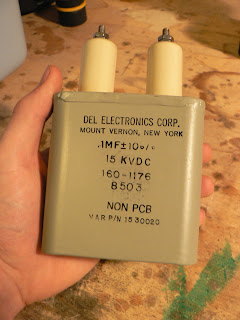