Here are a couple of diagrams and schematics giving a general outline of the experimental apparatus. None of the devices described in the diagrams have been built yet, as I am still looking for the materials necessary for their construction.

This first image is a circuit diagram for discharge circuit (click for larger resolution):

As you can see, the design is relatively straight-forward; it's just a basic circuit for capacitor charging and discharging. With the switch S open, the capacitor bank is charged to the input voltage (which depends on R1 and R2; I plan to set the voltage divider ratio at around 3/4, giving an output of 12 kV with a 16 kV source). In actuality, there will probably be a balancing resistor placed across each capacitor to avoid dangerous fluctuations in the capacitor voltages due to leakage currents. The value of each capacitor should be about 0.18 uF, which makes the total capacitance of the bank about 0.55 uF. After charging, the voltage source is removed and the switch S is closed, initiating the capacitor discharge. No resistors or inductors will be placed in the actual discharge circuit; the lumped values Rc and L represent the distributed circuit resistance and inductance, respectively. Essentially, closing the switch S shorts the circuit, so as to maximize the discharge current.

The next several diagrams are devoted to outlining what exactly is going to be placed in the ambiguous "water arc chamber" box. There will likely be three different accelerator designs used during this project. The first will be used to measure the kinetic energy of the water explosions, and is modeled after P. Graneau's accelerator designs.
(All the following diagrams are cross-sectional; the actual accelerators will be cylindrical.) 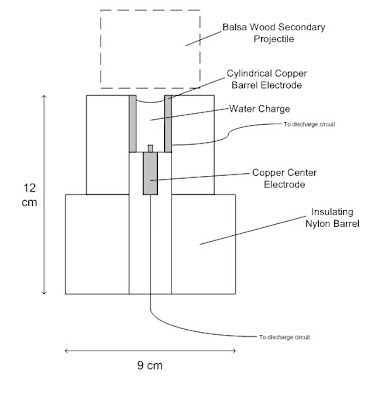 The purpose of the secondary projectile is to allow for the measurement of the fog jet's mass and velocity, which can be used to approximate the explosion's kinetic energy. The energy contained in the electrical impulse initiating the explosion will also be measured, using an electrostatic voltmeter to measure the voltage across the capacitor bank and an oscilloscope with a Rogowski coil to measure the current flowing through the discharge circuit. The two values will be compared to determine approximately how much (if any) internal water energy is released in the fog explosion (both energies may vary with water purity, water salinity, water volume, input voltage, max current, pulse length, etc.)

If it is found that a significant amount of energy is released during the explosion process, a new chamber will be built to capture the kinetic energy of the fog and convert it to a more useful form (say, electricity). The following is a diagram of one possible such chamber. 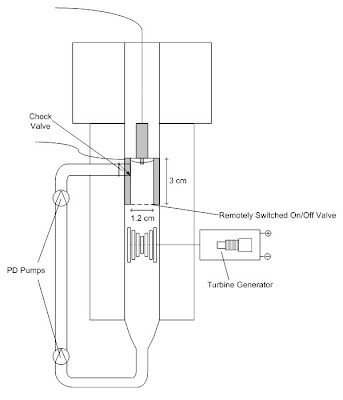 This design uses a turbine generator to convert fog kinetic energy to mechanical energy to electrical energy. After the water passes through the turbine, it is pumped back to the explosion barrel to undergo the discharge process again. To increase the net output of such a system, numerous turbogenerator chambers may be hooked up in series, so that multiple water explosions can occur simultaneously, each induced by the same discharge current.

I am skeptical of the efficiency of such a design. Water arc explosions have only ever been achieved with very small amounts of water (about 3.4 mL), which are accelerated to very high velocities (in the range of 1000 m/s). I anticipate that a turbogenerator will not be able to handle such a small mass moving at such a high velocity very effectively.

An alternative may lie in MHD technologies, however. Below is a diagram of a possible MHD generator chamber design. 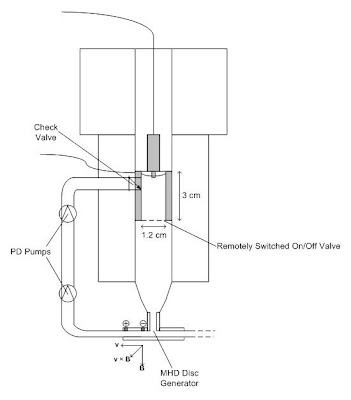 The idea behind this approach is that the water, after being ionized (or dissociated, atomized, etc.) by the electrical arc, will be sufficiently charged to serve as the conducting fluid in the generator. It may also be helpful to use saltwater as the fluid in this application, as it will be more conductive and increase the efficiency of the MHD generator. As with the turbogenerator design, multiple MHD generator chambers may be connected in series to increase the net output of the system.
Posted by Tucker Leavitt at 10:09 PM 1 comment:

In this blog I will be posting progress updates on my latest science project, which is an investigation into the feasibility of water arc explosions for power generation. The project has two main goals:

a) to reproduce the experimental results obtained by P. Graneau et al. in their research on water arc explosions (i.e. the findings that the kinetic energy of an electrically-induced fog explosion can exceed the electrical input energy)

b) to design and build an apparatus to convert the kinetic energy of such a water arc explosion into useful electrical energy, using either an array of conventional turbo generators or a variant MHD generator.

As of now I am still gathering materials and resources for the experimental apparatus. I will be able to post some design elements of the project (e.g. circuit diagrams) soon.
Posted by Tucker Leavitt at 3:31 PM 1 comment: