I have, quite literally, made a major breakthrough in my research, the results of which are depicted below. 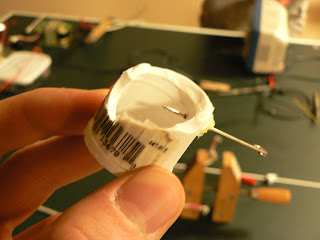 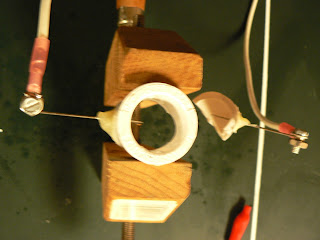 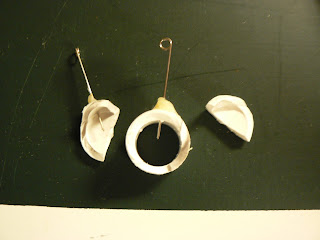 What you're seeing here are the remains of my homemade water accelerator barrel. The destruction of this small PVC cylinder represents the culmination of more than a year's worth of work. The bottom and side of the barrel were blown out when I fired a high-current pulse through the small amount of water it contained. If this isn't a veritable arc-induced water explosion, I don't know what is.

I was able to achieve the explosion by charging a 0.3 uF capacitor bank to near 15 kV and shorting the bank through about 3 mL of tap water. The explosion was accompanied by a loud pop and flash of light as the water ionized and several kiloamps of current rushed through it. In addition to fracturing the accelerator barrel, the explosion showered my workbench with little droplets of liquid water. Much of the water initially in the barrel ended up on the ceiling directly above it.

I had not expected the explosion to be nearly so powerful. In light of this, Peter Graneau's claim that water arc explosions are overunity reactions (i.e. that some sort of internal water energy is released during the explosion process) seems totally plausible, at least qualitatively.

Since I did not have my measurement equipment set up during the explosion event, I cannot be precisely quantitative about the capacitor input energy and the explosion output energy, but I can make some estimates. Naturally, one would think that the explosion's kinetic energy cannot exceed the capacitors' electrical energy. Let us see if this seems reasonable.

Now consider that the explosion fractured my PVC accelerator barrel. Determining how much energy this requires is difficult; the tensile impact energy required to break PVC is generally between 500-750 ft-lb/in^2, or 108-163 J/cm^2 (as measured by an Izod-type strength test), but this varies hugely depending on the PVC's actual composition, its shape, and the direction of the applied force. For the sake of argument, let us assume that it requires 100 J/cm^2 to fracture my accelerator barrel (this is on the lowest end of the normal range I listed above). Since the barrel has a cross sectional area of about 1.75 cm, it would require 175 J to break it.

This is of course a very rough estimate and can only give a general idea as to how much energy was actually required to break the accelerator barrel. That said, our ballpark estimate of 175 J is more than five times as much energy as was initially stored in the capacitor bank! And this only accounts for the energy required to fracture the barrel; additional energy was required to break up the water into small droplets and spew those droplets all over my work space. Clearly, the kinetic energy of the water explosion cannot be supplied by the capacitor bank alone, so there must be some other source of energy contributing to the explosion.

Peter Graneau hypothesized that the extra energy was related to hydrogen bonding in water. In his paper "Arc-Liberated Chemical Energy Exceeds Electrical Input Energy" (Journal of Plasma Physics, 2000) he sates:


"...the most likely source of the explosion energy is that stored by hydrogen bonds between the water molecules. This bond energy is said to be equal to the latent heat of evaporation, and therefore could contribute up to 2200 J/g"

Graneau does not offer experimental evidence to support his theory, but I hope to procure some evidence either for or against the theory myself  in the near future (more on this in future posts).

Another theory (also propounded by Graneau) is that the explosion energy is related to longitudinal current forces (i.e. forces in the direction of current flow) predicted by Ampere's original force law but neglected by Maxwell-Lorentz-Einstein electrodynamics. The way in which my water accelerator barrel was destroyed may support this theory. As is particularly apparent in the second picture at the top of this post, the force of the water explosion seemed to be directed away from one electrode, viz. the negative one, and towards the other, viz. the positive one. Since the direction of actual (cf. conventional) current flow is from negative to positive, the explosion force seems to be in the direction of Ampere's longitudinal current force. I may experiment with different electrode configurations to explore this theory further.

I realize I've interspersed this post with fewer pictures than usual. To compensate, I'll give you a visual tour of my current charging/discharging apparatus.

Stay tuned for more updates. They should be coming soon.
Posted by Tucker Leavitt at 2:44 PM